...in the Visitor Center. You can stand on the plate glass and look down and see the miniature version of the McCormick mansion and gardens. Among other things, McCormick owned and edited the Chicago Tribune and was a WWI veteran, which explains the odd fact that the gardens include a "tank petting zoo" on one end. J and I saved that for another day. I took a few photos, but it was still too early for much to be blooming in the beds, though it was almost 83 degrees and sunny. On St. Patrick's Day, in Chicago. We'll be back later in the season. The Pig Squeak looked fine, though. 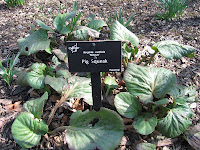