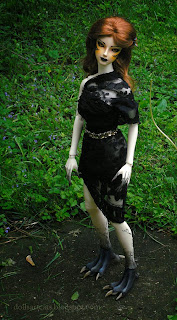 I bought the 5 star Angelo head from cheesedemon88 because I loved, loved the faceup and the eyes. The question was-- what body to put her on? Cheesedemon had her on an old Soom Super Gem body, so I knew the head would fit ok on that neck. 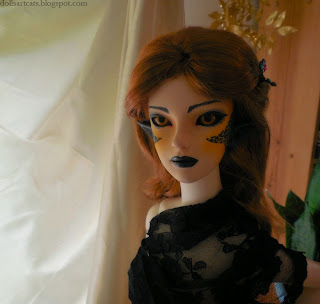 But which Soom old body? I had a Nephelin torso from AnchixdPix, from my attempt to get my painted Nephelin wings from Cat on someone, preferably my WS Dia. I had tried making a harness, and that wasn't too successful so far--the wings are heavy. So I bought the Nephelin torso, but it turned out to be Normal Skin (I have no idea why I thought it was WS). Also, the wings that Cat gave me are old creamy White Skin rather than new white, and my Dia is new white. The Nephelin torso was NS--but it does hold the wings...mostly. So I have now two pairs of Nephelin lower legs, one WS and one NS, one pair of old Creamy White wings, and a Normal Skin torso and fancy hands. The extra pair of Nephelin claws was for Polly, as a replacement for her huge, heavy Galena claws (Sicktress actually has them now on her Dollshe boy hybrid Suoh, and they look way better on him). But the Nephelin knees somehow are narrower than the Galena knees, so the Impldoll thighs fit poorly into Polly's new Nephelin calves. At least they are the right shade of White skin. *_*. Anchix still has the NS wings that go with this body. I haven't decided if I need to ask her for those as well or just make some wings for this girl from scratch. Much lighter wings. In the meantime I will be working to add a little more paint on her body here and there, make a custom wig, and some more dramatic clothes. The Nephelin feet, by the way, are incredibly stable. They aren't huge either, and of course the claws solve the shoe problem completely. 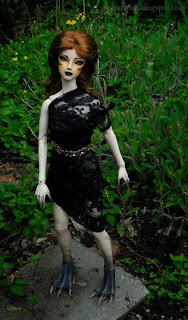