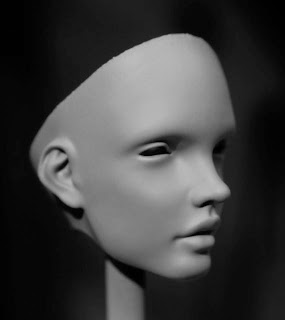 Here she is, still a work in progress, but already someone I could have plans for :D. She also looks slightly familiar though I can't quite place her.

I missed posting yesterday because I have a couple of projects going, and I wasted a lot of the day driving in Malaysia, playing the MapCrunch game. MapCrunch hooks up to Google Street View and randomly picks a landing spot for you, and then you have to use the road signs to find your way to the nearest airport. There are no prizes or anything. (J found this a little baffling as to why I would spend three hours and a lot of swearing trying to weave my way through construction in Kuala Lumpur to find an airport, when I wasn't even going to get a score.) Somewhere there is a scored version, but I cheat and transfer my coordinates to Google Maps at the beginning, so that I can move myself down long highways faster. For one thing, my cache fills up and then Chrome freezes. So far the most fun I had was going from Tres Valles in Veracruz State, Mexico, to Heroica Veracruz where the "aeropuerto" is. It was partly because around Tres Valles there is a lot of fun stuff to see, but also because I can read enough Spanish to enjoy the shop signs and other incidental writing. There are flowers everywhere. The most boring "trip" was Latvia, where I got put down right next to the airport; so instead I went into Riga and puttered around the city center, looking at historic buildings. Then I got totally lost in Finland, and then remembered that I needed to go to the grocery store and do some other things than virtual touristing.

So we went to Ikea, where I had considered buying a chest of drawers to cut down on the amount of stuff I have in Tupperware. After wandering around Ikea for an hour or so, I didn't buy a chest of drawers, because I didn't want to spend nearly 200 dollars and still have to hump two huge boxes AND then screw everything together. So we just bought a shower curtain. It is, however, an awesome shower curtain: 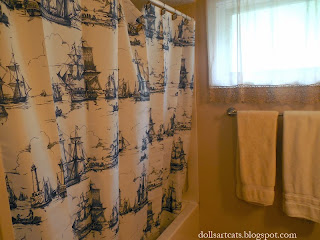 And we did go to the grocery store, too. I still need to go back to Finland and start over; it's challenging because it is flat, there is nothing but forests and lakes and the road-- and a lot of signs for places I was not familiar with; and you just drive forever hoping for a sign that says "Helsinki" somewhere.