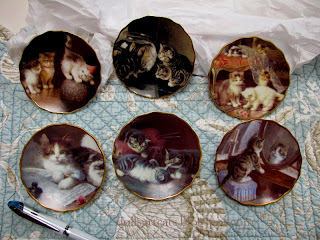 One of our neighbors had a yard sale last week and I bought, among other things, a set of doll-sized kitten plates. I bought them not for hipster ironic reasons, but because they were tiny and had kittens on them. I tried to think of which of my dolls would collect kitten plates. Martine, Lady Pickering has most of the things like bjd scale chandeliers, candelabra, mirrors and gold-rimmed plates and a formal tea service, but I doubt she would touch kitten plates with a serving fork. I decided it would be the most amusing to have Captain Aldwood have a secret kitten plate addiction; and he would protest: "I buy these for my mother!" They are a perfect size: 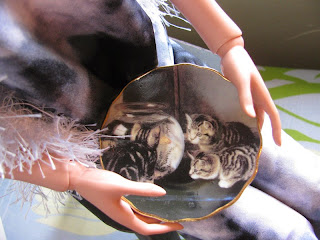 We spent a good part of yesterday doing some heavy demolition--we have a fireplace in the basement built over the fuse box, so it needs to come out to get us back up to code, and the carpet down there was pretty dire and filthy, so that had to come up too: 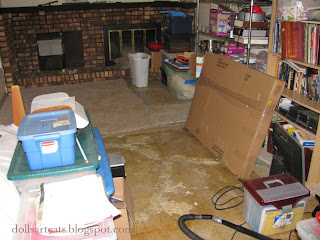 Here you can see the concrete slab (in good shape, even with the old tile glue on it), the vile tile, the carpet padding, the carpet, and the brick double fireplace..yes, two, one unused and the other with gas AND wood in it. It's amazing the previous owners didn't burn the place down, as the flue was just a thin metal housing with spun glass insulation wrapped around it. J managed to lever off the wooden mantel off with a crowbar and now it's just a lot of hammer and chisel work to pry off the bricks and hopefully save most for use in the garden. But all this unaccustomed exercise made us tired, and I overslept this morning and woke up at 10, and realized I needed to pay bills before the mail truck came. So I sat down with some coffee and started paying them, and sticking stamps on the envelopes in something of a hurry. I was putting small flagged stamps on assuming they were Forever stamps (they look a lot like the forevers without my glasses and before coffee) and it wasn't until they had already been put in the mail box on the street that I realized that they were 44 cent stamps and I needed to put more postage on them asap, which meant that I had to put Gretas on them. For some reason I bought a whole sheet of Greta Garbos, without really considering how fast I would go through them, and how big Greta's head is. The envelopes that various utilites and banks provide me have orientation bars printed on the top, I assume so that they can be automatically sorted and opened, so I try not to cover them with stamps as it can delay processing, and the bills were already a little stale since I did nothing about them for two weeks. But now I had to put Greta's huge head on all these envelopes. If I get a late charge it will be partly on Greta's head. 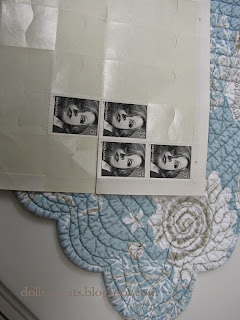