My Soom Tremo arrived yesterday; he spent some time waiting at the post office because of a mix-up, but then J rescued him and I was able to get him home. Of course the box with his stuff has disappeared among the other moving boxes; so here he is wearing Fu Bai's wig and Vittorio's underwear. I have to say his body is not as well engineered as Gneiss's was, but the body may be a work in progress--there are a lot of pieces inside the body, but they don't quite work together. More than anything else, he needs the waist joint back, and I should have bought the Extra Pose legs. However, his hands with the magnet prongs seem much more robust than Gneiss's, and the ability to take off hands makes dressing much, much easier. 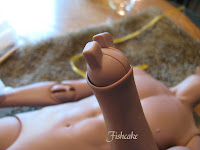 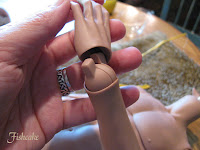 His legs are shapelier than the older body, but he also needs larger feet to balance the weight of the new shoulders.

The faceplate is also a big plus, like the hands, it makes it easier to change the eyes and work with the elastic, which is held on by a curved resin piece. I still put a ribbon through the top of the loops, so I have a handle I can really pull hard with when I need to work with the elastic.

I'm so happy to have him--he's the last doll I will be getting for a while, as I have things like sump pumps and carpet to pay for.