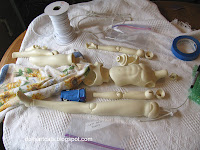 Yesterday I shipped a Feeple 70 cm body to Xtal, since Hermione is just not going to wear it, in spite of the fact that the Feeple body has the very convenient "neck key" that lets you take Luts, Feeple, and Minifee heads (Feeple and Minifee are both "Fairyland" lines) off and on with just a twist of the key: 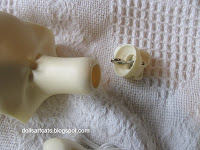 You can see from the nick on the body's neck that the previous owner(s) probably also used a conventional S-hook on the neck, probably for a non-Feeple head. It's easy to damage the neck getting heads on and off without the key. You can also see that the eyelet on the key has been squashed tighter with pliers; the key was probably in another neck and needed to be made smaller to fit in the current body's neck. Xtal is being very nice in letting me keep the key; I will restring it and put it in the spare SuperGem girl body I have here..somewhere..and then I can put Hermione's head on with the neck key instead of rigging a bit of wood across the inside of his head.

Xtal is very "handy", which is why I took apart the body to ship it to her--she will have no problem restringing it and providing an S-hook; she will probably also clean out the "hot glue sueding" that has made the inside of the joints looks dirty.(Actually she will open the box and roll her eyes at the level of unstringing I did. :D) Sueding makes the dolls stand better if it is done right-- if you can avoid making lumps. Sueding adds friction to the joints. Personally I have no skill with melty hot glue, so I don't do it with my new dolls. Here's the body all packed up: 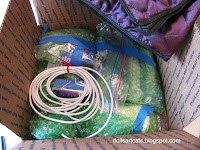 Xtal owns Cecil, a Soom Sphaler--I have a crush on this doll! 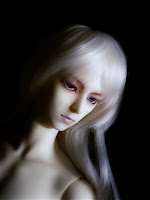