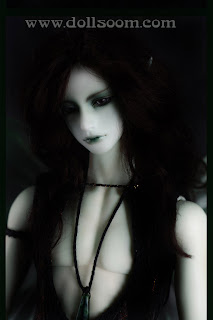 A year or so ago, Soom did a female version of La Fee Verte, the Absynthe Fairy; and while her wings were fabulous, she really didn't look old enough to drink herself, or like she had any interest in the bohemian life at all..she looked like a refugee from the Garden Fairy series that had accidentally fallen into rough company. But here Soom has revisted Bohemia with Boehm, The Smoke Fairy. Boehm should probably come with a surgeon general's warning, but he is quite handsome and also comes with Mighty Fine wings. Luckily for me he is too small to even be a cabin boy, though I like his face a lot--he looks a bit like a mini Sphaler cousin. His sales page is here: