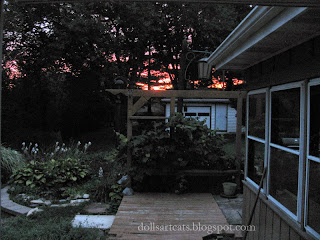 This was taken around 6:24 in the morning, when two things happened--it started to smell so much like skunk in the bedroom it made my eyes water (I think a skunk likes to sit under the hostas right outside the bedroom window, but it's also looking like maybe one has figured out some nook or cranny just outside the basement to lurk in.) In any case, usually I just open the window on the other side of the house and try to ignore the smell, but there was also a bang from the kitchen and the cat decided it was time for me to get up NOW since she doesn't like skunks and/or strange noises. So I staggered out to the kitchen and it looked like metro Chicago was on fire,(though it was just the sun coming up) so I took a photo, and started to check around to be sure the skunk wasn't on the porch. No skunk on porch, or at least what I could see through the kitchen window--the back door was shut and locked. So I checked mousetraps under the sink. No mice. I fed the cat and took another photo: 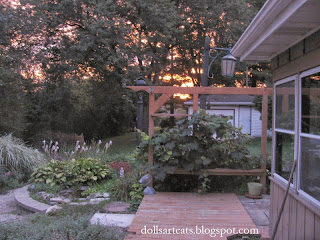 It's now 6:40. I start to open the Drawers We Never Put Things in because of the perpetual mouse problem, and in the last drawer, there it was: 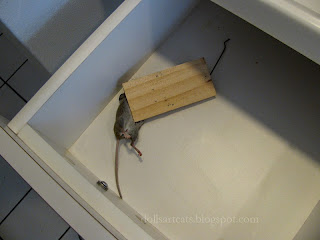 I know it's mean to laugh at mouse tragedy, but really. But now I had to actually lift it out to get rid of it, and while I have handled rabbits, snakes, squirrels, chipmunks, birds and bits of all of the above, I just can't deal with mice, and J was in Vancouver at a conference. So I finally worked up the courage to open the door to the porch and grab the tongs (still no skunk in view, only in smell) and get the mouse and the trap out of the drawer and into the trash. It was now 7 AM and I was too awake to go back to bed, and also the trash had to be put out--which also meant more places I might find the skunk. I went down through the garage and out the door and got the trash to the curb. So far, no skunk. All this would have been easier if I hadn't stayed up until 2 AM reading some very scary suernatural detective stories by Kat Richardson, which is never a good idea when one is alone in the house with lots of wildlife outside.

I did later in the day get a nice picture of a grasshopper, though: 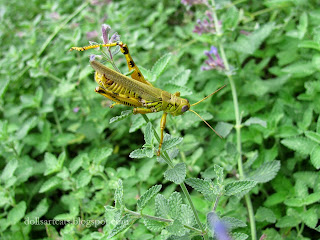 I just hope the skunk was just stopping by this morning, and is not sleeping in the space under the fuse box in the basement. I haven't looked there.