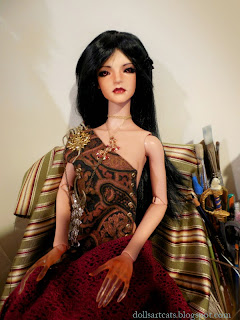 Back in 2012, Soom did a hugely popular Free Choice Event of their early fantasy dolls, where you could order things like Beryl, Cuprit and Topaz in any color as long as it wasn't the original color. You could also mix and match heads and bodies, though you had to buy a head and a body. So a lot of people ordered a) Vesuvia as a full doll (I have the one in Normal Skin, she was originally released in a lavender glitter resin) and b) a Topaz body with whatever head they really wanted. This was because the Topaz body was the cheapest one and the closest to the normal human body--she came with clear orange fantasy hands and feet, though since her fantasy feet you can't use to stand her up on, Soom also included human flat feet and heel feet with her. The problem later came when people took off the head they wanted and then popped out the headless body on the Marketplace--I think the normal skin bodies got picked up right away, because it's easy enough to get normal skin hands for them, but then there was this gorgeous bronze body. I think Aceinit was the first one to buy it, but then she waited and waited for a bronze head to show up (she wanted an Onxy or a Vesuvia) and of course anyone who had those would have to be in dire straits to sell it, so no dice. Aceinit finally gave up a couple of months ago and sold it to someone else, and then last week the next person also gave up and flopped the poor thing back out on the MP. However, because it had been floating around so long, I HAD A PLAN for it and as soon as it arrived here at the house I went back to the Marketplace and collected a Granado Gabe head for the body, since I know the Granado boys fit perfectly on the fat old body Soom neck. Then it was just a matter of painting to get it close to the body, and voila, a head and a body. Now she needs appropriate clothes for a Mesopotamian goddess. (These were just so the photo would be Safe For Work).