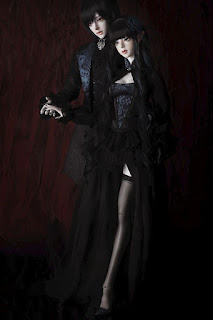 It says Soom Albin and Witch in some places, and Sonya and Raskolikov in others, which would make sense if it was the Albin mold and the Sweet Witch mold, but there is also the title:
"Prestuplenie and Nakazaniye" (with variant spellings on the Nakazaniye) I wish sometimes that Soom would just give their dolls normal Korean names and leave it at that, and just one per doll *o*
The mystery is deepened by the fact there is no brief backstory on any kind, though it looks like one is a vampire and one is a witch  and they are related somehow?
Anyway, they are quite beautiful and you should especially check out the outfits, which look magnificent. 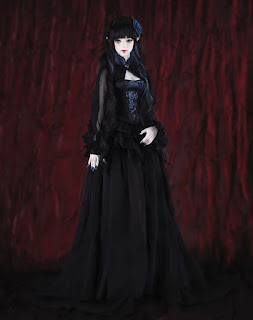 And speaking of Soom dolls, I snapped a photo of Petra this morning, sitting in a pile of silk flowers that I moved out of the porch, while I put in flooring. 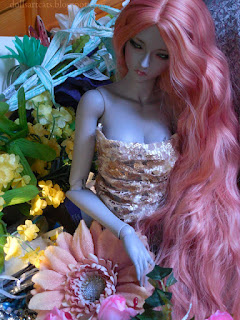 I would be tempted to buy her Sonia's outfit-- but I need two more boxes of Trafficmaster Carrera, since I messed up counting how many I would need. (I had too much gray, not enough white)
Soom Albin and Witch