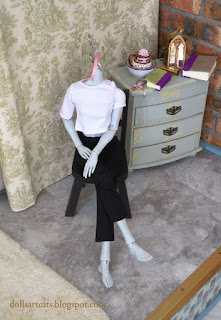 Sicktress' Mirodoll Muscle Body Part One
------
Okay, today I redid the string so it has the knot in the torso, and not coming out of the neck, and I investigated some clothes. The pants she is wearing are from doll.i.com according to the tag, and they fit perfectly. She is more or less SID sized, though it looks like she can wear those older Delf boy pants. I think her shoulders are a little wider, though. The shirt she has on used to belong to a bear, so it doesn't count, but EID shirts fit her fine, though a little loose in the waist. She actually has the PERFECT body for corsets, and though I hadn't thought of a snow goddess wearing an 18th century corset, I think I will make her one anyway. I think her shoes are somewhat similar to the Soom male feet in size--it's a pretty sculpt, one of my favorites out of the other girls I will put up here for comparison. 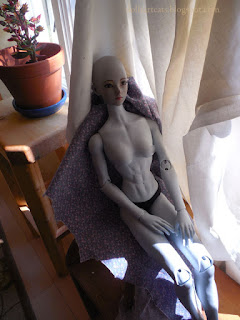 This is with Ashley, a Soom Snow White, on the body. Soom's gray is a lot warmer and more brown than the cooler Mirodoll gray, also Ashley has a tiny head--it works on the smaller Soom 2012 body but looks a little pinheaded with the Mirodoll Muscle wide shoulders.

So here is the original Deesse head on the left, "Danu."  That is the head, in gray, that I want to put on the Mirodoll Muscle body (66cm). Danu's head is on an Impledoll Idol body which I believe is 70 cm tall. I had to grind down the neck to have the head fit on the neck, but overall the proportions are really nice, though Danu towers over everyone (as she should, being a goddess).

The wide shoulder of the Mirodoll body will be good to balance Dee2's big head. Right now Ashley/Isa (the Mirodoll) is wearing Iplehouse SID underwear and it sort of fits--I prefer the cut of the Beachgirl Nikita briefs from ebay that Danu is wearing, they are made of stretch lace and elastic and don't catch in the legs. On the right is the classic Old Soom (2012 to 2012, that is a Soom Nephelin) body at 64 cm tall.

Here on the right is an Iplehouse Luna with the old EID body--she is a lot chunkier than the other two girls, and a bit stiffer, but good at standing and sitting. All of them have more or less the same shoulder measurement, but different bust shapes and sizes. (I will measure the Mirodoll body tomorrow)

Now there, on the right, is an Impldoll Azalea on an Impldoll Muscle body. Kind of the same idea as the Mirodoll, but the Miro is a lot more posable for some reason because of the shape of the joints. Miro wins for better hands and feet as well :D The Impldoll has more muscular legs.

Here is a 70 cm Resinsoul Lian body with a Soom Migma (Coral) for a head. The Lian body is much slimmer and also a bit wobbly compared to the other two dolls--she is nice for a fairy character and the price is about the same, in the 160-200 range. Coral's body is the purple that you get if you just ask for "purple" from Resinsoul with out providing any samples. I really love that color and I was planning on dyeing Coral's head to match the body buuut....look how close the Miro body and the Soom head are! I always thought of Migma as "purple", but to be honest, over time she really is a sort of blue-gray. So I put Ashley's head back on Ashley's body, and swapped Coral over. 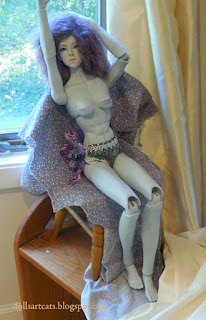 Look how close the resin colors are! This means that for 160 USD plus a little for gray, you can get a body for all those floating "lavender" Migma heads that are around, and even the original gray Iplehouse Luna Tamer-- and possibly the Addiction girls from Iplehouse as well--I remember seeing a gray Grace Addiction head on the MP lately; and wondered how you could match a body to the head. Well, here is one answer!

(Sadly for Coral, she can't keep this body, it's for Isa when she arrives from Sicktress. But I know where to get more ):D

-How to make a corset for this body-