Soom Puss with a body 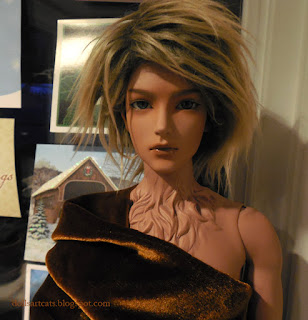 Last summer I bought Puss' cute little head, but had him on an Impldoll body--I had bought a Tan Dia head and body to put his head on, but the Puss head looked like a pinhead on the Dia body, and the Dia head resented being a body donor.(I still have him as a complete tan Dia boy). It turns out that maybe the Puss body is actually narrower than the Dia After School body, because he looks great with his own Cat body. This is the body I got from a trade from Evenstar1, and I have to say it was a fantastic trade for a lot of reasons--she seems to like Mr. Gigantic Dollshe (she has already made him some clothes) and I am very happy to have not only the Puss body, but his Cat Head, his Ears, his ridiculous fur tail, and his Fancy Hands. (I also received his human chest, but I think the Cat Chest is a lot more fun:) 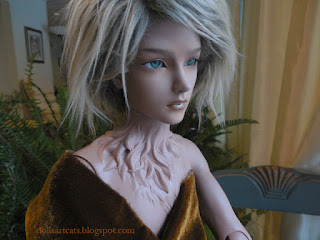 Once Puss is in his 1630's jacket and lace collar you won't see it at all, unless the moon is full and he's got his Cat Head on :D. He's a cutie pie and much much cuter than you would have guessed either from the Soom promo pix or my photos here. This is him sprawling on some of the fabrics for his outfit: 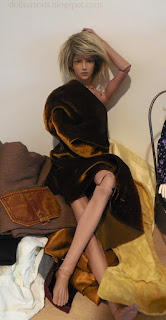