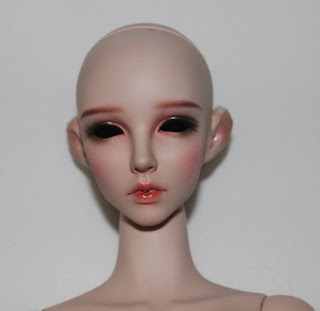 This is Calia, a Souldoll Vito girl--a size that is larger (and curvier) than the Soulkid size, but smaller than the full Zenith girls. She's only 51 cm tall. I liked the fantasy version of her, but I liked it more as an amazing art piece than something I would do something with--here are the store promos: 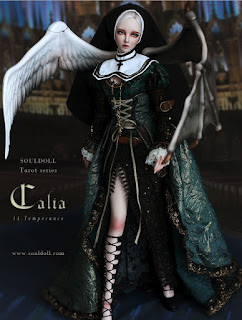 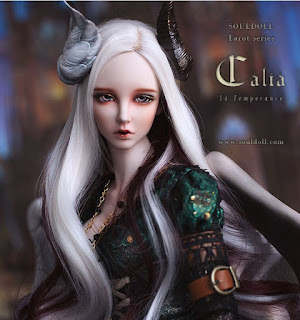 Here you can see she is Temperance, one of the Tarot series. It's a brilliant take on the balance between light and dark, with half of her with "angelic" traits and the other half "devilish" traits. If I had a million dollars I had to just piss away, I would collect the whole set of Souldoll Trumps (21, I think) and put them in a row of cases and just admire them). In real life, I am content to admire the store promos. However, I did want a Vito body so I could answer hybrid questions and know the proportions for sewing presents, and this lady is the perfect candidate, as her ear problems brought the price down quite a lot. If you have Den of Angels Marketplace privileges, you can see the set as it comes from Souldoll, including the gift dress (ooolala):
https://denofangels.com/threads/900-%E2%80%93-souldoll-tarot-calia-riris-vito-girl-full-set-blank-full-doll-normal-skin.735741/

This Calia had some very nice apoxy elf ears, but the owner had a project regret..a regretsy? and nommed them back down with a dremel. I think my best move would be to just build them back up, because I like elf ears, and then touch them up with paint. More troubling is the bubbly faceup--when it's humid, or there is any oil on the resin, the sealant just does that. There is no predicting it and IMO no one to blame for it, but it means that I will need to repaint her. Oh noes! At least I have the store photos for a guide and soon a new set of Tamiya brushed designed to do those tiny lashes and brows. Also, I need to make more eyes as I am having something of an eye crisis at the moment.

Also, I love, love that dress. Souldoll makes the most amazing outfits for their dolls! So she may be arriving sometime next week, which means I should look up eyeball sizes and see what wigs I have around that might fit her smol head. As for clothes, it's going to be a scarf for a bit. :D
Souldoll Calia Souldoll Vito Girl