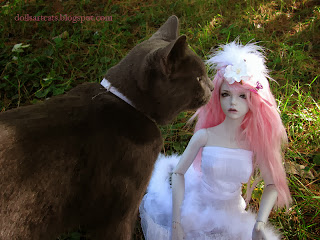 On Monday, September 30th I came back with K from Costco, unloaded the groceries, checked as I always do that the trunk was empty of cats, locked up the car and petted the gray cat as I went up the stairs, and then after I had put away the last of the groceries, we out to the back yard to hang out and so he could see K (whose room he lived in as a kitten with his sister—they used to tussle all night while poor K was trying to sleep..on top of K.) After being petted (and squirming) I set him down, and he scooted off to the back of the yard… and that is the last time I have seen him since then.

I stayed awake late in bed Monday night, listening for the cat door (I still do, though not consciously). Mr. Skunk came around, looking for grubs, the dogs in the neighborhood didn’t bark (coyotes) and the owl was silent. There are plenty of dangers for a nine-pound cat here, even a very fit, professional hunting cat. We gave him a chip and a collar, planted things he could hide under, bought the biggest yard we could afford, made him custom collars (which he lost every two weeks) with his name, phone number, chip number and address on it. We once tried to keep him in for a month, but he first made noises like an F-16 taking off (for hours), and then got very, very depressed. The vet told us to keep him in regardless, but if you went up to someone on the street and said, “We can make it so you will live to 100—there is just one catch—you have to live in three rooms for the rest of your life, with two kinds of food and one box of toys. And of course they would say “Hells no.”

So we knew there was a good chance that since he was living like his wild ancestors, he would have the same lifespan, but it seemed (and still seems) the right thing to do. (Though his ancestors didn’t get toweled dry when they came in wet from hunting in the rain, or get regular immunizations and the occasional much-needed worming.) I still hope I will hear the cat door, and he will walk in and ask for a treat..and then want to go back out again, but after 4 days I don’t think that will happen. People will say, well, he was “Just a cat” and he was..not a super smart cat, or a pedigreed cat; but another little affectionate person whose company got me through some miserable and lonely times. A cat who liked giving kisses, who had a sense of humor, and was always ready to share a dead mouse with me. I will miss him a lot—I think his sister already does. 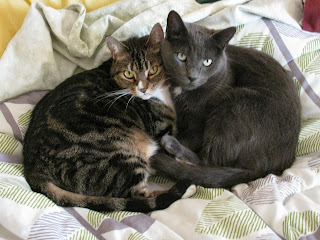