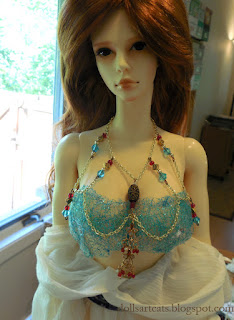 Some days I miss doing a blog post because I am out all day, and on other days I have spent the day doing things like using a Magic Eraser on the tub, which no one really is interested in (including me). Then there are days when way too much stuff happens. Yesterday was like that--I received a Breccia head from Lilien, in Budapest, and so I wanted to get her on a body and in a wig and an outfit so I could send Lilien a photo (I always feel like I should reassure the previous owners I have no intention of painting their former dolls purple or using them to prop up tables, unless they were in on the plan).

So I took this gorgeous head, and put her on the body she was intended for by the factory and in the right color...and it didn't look all that great. Her head is fairly small, and the original Breccia body was large, with the added bust and legs and a huge fur tail... and I have no idea what that was about. Ideally I think she should be on a new Super Gem Body, which is smaller and nicer than the one she shipped with originally--but unless I want to decapitate Noodles (again), Miss Breccia is just going to have to wait. In the meantime she is on the Mirodoll body, which except for the neck being a bit thin, looks quite good: 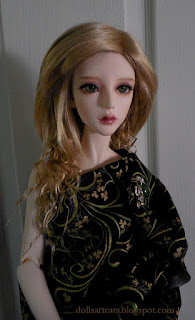 So this all took some time, and then Buff sent me this ENORMOUS box of wonder which included, among other things, a scale version of Loki's scarf from the first movie, a repainted Juri 07 b (the former Violetta, now all repainted and refreshed), a complete suit for Tauriel including an extra magnificent overdress, 2 pairs of boots, 2 "option parts" for boy dolls, and a suit from a famous anime (a very expensive set of clothes that includes a fur-trimmed coat) and a pinafore..AND my Karena head, now repainted to be a stone/gem fairy. So no one needs to get me anything for Christmas. :D

Coriel in the meantime was fully occupied being the fit model for a "shirt" for Chalyss' demon girl, who hopefully today is being delivered to her, and also hopefully is in the Lucky Chinese Red that she asked Impldoll to cast it in. So now I need to get Coriel into her new things and out for some photos so Buff can see what an amazing job she did on those clothes. Also, it is sunny and dry so I am trying to remember who needs painting, while I can paint and spray. I should also paint the shed door today while I can.

Also, in a First World Problem that only doll collectors have, it turns out the cyborg body is an exact match for the Breccia head, and the old Super Gem looks like it was intended for Garnet (which is sort of is, as Garnet is a reissue of Vesuvia). Hmmm. 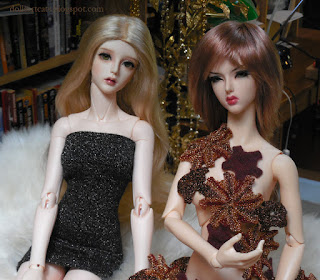