Patsy and Edina and a Mouse 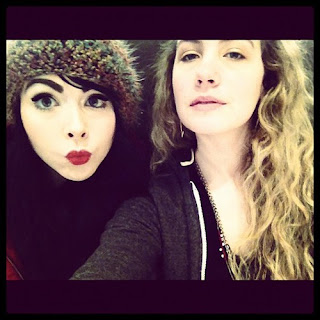 Jackie had to go down to the clinic for a checkup, and K went along for moral support; since Jackie always dresses smartly, K felt that she had to dress up too. The clinic is not a fancy place. K said, "We looked like those people from Absolutely Fabulous, with cute little purses and everything." While K waited, her next-over-seatmate chatted on a phone, expressed an interest in "getting a drink after this", and offered K a piece of candy from her purse. (K said her purse was "FULL of candy") K declined, somewhat reluctantly, and as the weather changed over to rain the lady amended her plans to "going home, having some chicken and watching TV" which sounded healthier than bar crawling...at 11 AM. Jackie's appointment finally concluded, they left and went off to do more fun things, including take some photos, and possibly having chicken. I think K has a TV but it gets used mostly for watching old VHS tapes.

And now the latest from the Minister of Information 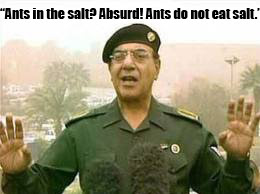 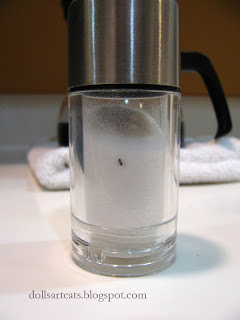 It was burrowing around like it was in Uncle Milty's Ant Farm, so J tossed out all the salt, which meant that at lunch today I spent a long time shaking the salt container and wondering why nothing was coming out-- until I finally looked at the container. I would have just fished out the ant.

We did have a mouse earlier in the week; we set a trap for it, and at 2:26 AM last night the trap went off... and that was it for the mouse. I'm finding mouse control a lot easier than ant control.

Aileen doll has come up with a new adorable tiny, making it hard for me not to buy the things: 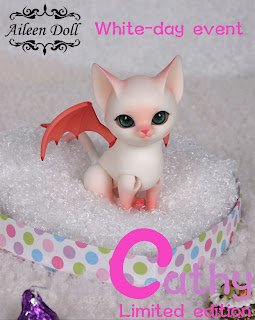 This cat could deal with mice on the counter, but at the same time nothing on the shelves would be safe. I am grateful my cats don't fly.