Stripey vs the Ants, Impldoll Chapman 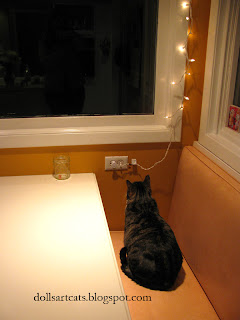 We did a test to see where the ant line was by the window (using a bit of frosting) but Stripey decided to help the experiment by licking up some of the ants, so we cleaned up the bait. We knew they were coming in around the window anyway, though we seem to have stopped them from coming out of the outlet (or storing more stuff in it).

For 40.00 including shipping, I bought an Impldoll Chapman head from another collector. He looks really odd in the store promos (he has a head too large for the Star 65cm body) but cleaned off he's a nice sculpt. His eyes are a bit uneven, and I was planning on modding them anyway, but he's a good-looking head. The downside is that this one seems to be cast in French Resin, which Impldoll eperimented with briefly (I think back in 2010), which eventually turns banana yellow and the paint does not want to stick to it. Impl has since switched to whatever everyone else casting in China seems to use. For 40.00 I plan to just experiment with him with paperclay and various paints. 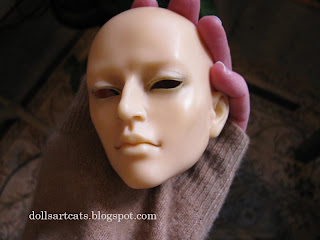 And today is the warmest day yet here, warm enough to pull out the pond filter and get some serial numbers to order replacement filter pads. String algae seems perfectly happy growing in 20 F weather, so I have some scraping and dipping to do as well.

The birds are back--here my grey cat is getting a stiff neck staring at two pairs of doves, one set on the roof and the other set on the back fence (larger in the inset). He's out right now, hopefully eating voles and not birds. 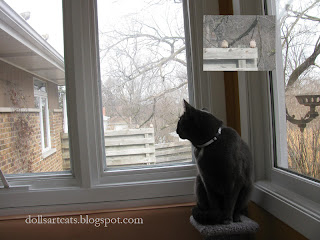