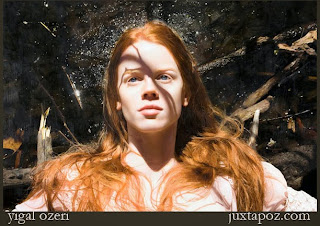 Over at Juxtapose.com there is an article about New York artist Yigal Ozari, with some samples of his work. He paints photorealistically, which is a little misleading as a description--he paints paintings about how a camera sees the world vs. how humans see the world. Human eyes see things more in medium values--we would see more details in the water and shadows in the scene above, and more of the woman--our eyes don't "blow out" the highlights of skin the way the camera does. The contrast in the painting is pushed up so that it goes all the way from pure white to pure black. In art classes, the teachers often push students to "use the full range of values" from white to black, because we tend to paint what we see--which is a lot more nuanced than a camera, but also makes for a less interesting painting with more medium values and less contrast. The other trick is to blur the parts that are in the background--here's a tiny part of a cover I just finished, and the tree branch looks fairly realistic because the background is blurred and the highlights are pushed up to be super bright. (If you zoom in up close you can see it's a scribbly mess) 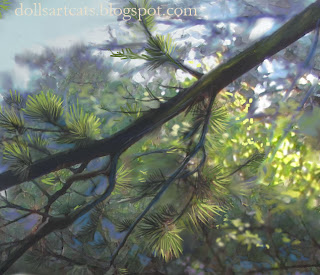 Here is Ozeri setting up a painting--you can see where he has roughed in the stripes of the bathing suit and a bit of the grid that makes accurately copying an image easier. 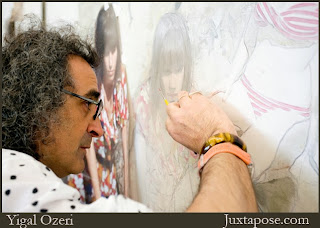 Some of the very photolike appearance of these paintings is helped by the scale--he paints large, so when the image is reduced it looks more photolike; it hides all the painting marks. In person I think it would be obvious these were paintings and not enlarged photos. Here he is in his studio: 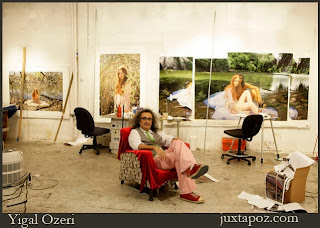 If you want to see more here is the Juxtapose article about Ozeri, with a slide show. The site is definitely not Safe For Work, though the article itself just has some artistic nudity.