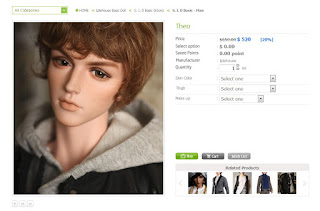 Yes, a small number of Iplehouse's dolls are going to be discontinued, here is the Notice: 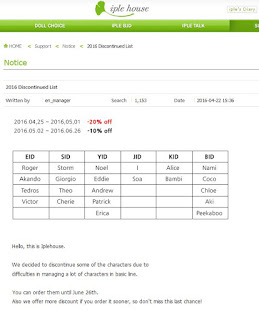 The good news is that if you log in and go here you can get these going-out-of production dolls for a hefty discount, 20% if you don't wait too long. The deeper discount lasts until May first, after that it drops to 10% until June 26th, 2016.  I looked over the list and was vaguely tempted by Cherie (she is much cuter in person than the store promos would let you believe) but I also heard a rumor (just a rumor) that the Carved Heritage line would also be phased out this year, and rather than have to dig around in Doll Choice, I took part of the money I have raised from The Big Sell Off and put some down on an NYID Bliss, while she is still a Standard. It looks like the Cats are popular enough they will still be here by my birthday, when I might get a Siamese one. :D