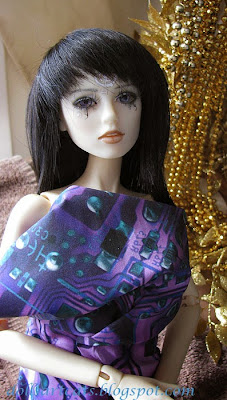 OK, so my head-hoarding doesn't seem so ridiculous now... Granado now follows IOS's "bad example" (as NikiB on the bjdnews.diary.ru blog puts it) of deleting older molds. Here's the news:

Thank you for your support to Granado.

Our 3rd anniversary is coming. Before that day, we decided the followings will no longer be available.

1) Sidonia - The next door beauty

6) Davon as Romeo, Romeo and Juliet

The above mentioned dolls will no longer be available after 31st, March, 2014.

Also, we will stop producing the dolls once we reached the quota.

Thank you for your attention.

My Epidia says "HA! Now I get to KEEP that bronze body!" (I was thinking of getting a bronze Sidonia head for it but that was several months away). More bothersome is Chaka, who I was sort of saving for as the Ship's Master. :P
Granado Dolls