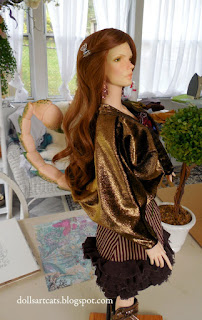 I am bringing 5 dolls and it took me ALL DAY to locate shoes, wigs and jewelry that was presentable for these guys. I need to start drawing names out of a hat and each week make one complete outfit for each doll, so that if they have a chance for an outing, they have something to wear..both tops AND pants. I never did find Rusty the Vampire's cravat, though it has been floating around on table tops for weeks. Up there is Isley, named after Poison Ivy. She always has good shoes, though I just today realized that they don't zip all the way up her calves 0.o 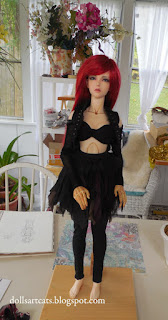 After this photo I found shoes and a witch's hat for Cherry, though she still looks a little chilly to me. 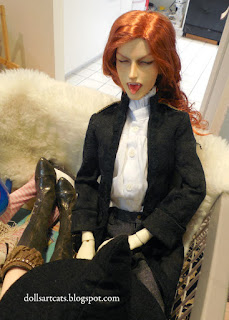 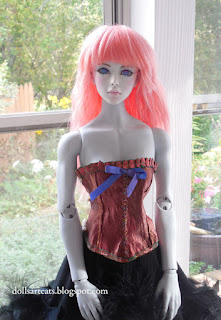 This girl needs her own clothes--she got the cast-off tights I made for Naomi and decided they weren't good enough, a skirt that belongs to Tanglewyn, and a corset owned by Cecelia, who is a Granado Nuevo and has a similar wide shoulder. Coral might be the project girl next week 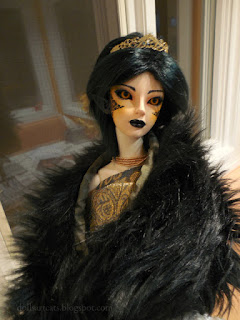 Or maybe Dragael, who has a box of wonderful notions and trims but no actual clothes (this is a scarf, and a collar from one of my coats). She is a challenge to sew for as her hands are both delicate, wide and pointy; and her toe claws are large and sharp, AND her ears are pointy and wide. It's like dressing a stylish porcupine.

I thought I would take some photos of my dolls today since I often forget at the meets, since I know what my dolls look like. :D
5 star Angelo Granado Venus IOS Infernale Soom Cyborg Soom Migma human Soom Nephelin