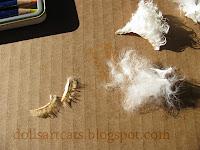 Doll eyelashes are fragile and don't survive being moved from one doll to another, usually. So when I redid Tamsen's (a DollZone Wing) faceup I didn't have any replacement lashes for him that were brown or blonde, so in desperation I took a fake sheepskin bathmat and scissored out two tiny pieces, colored them with acrylic paint, and glued them on. They are..slightly weird. I think I am going to dig through the feathers and see if I have a brown/blonde ones hiding and make lashes out of those. Part of the problem is that the bathmat would have worked if I had applied the "hair" a bit at a time to the inside of the lid with superglue, instead of using a strip of hairs from the base of the mat. The thickness of the strip holds the eye back and slightly out of place. 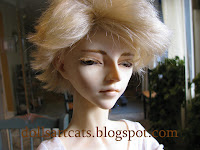