One Yard of Black Fur from Fabric Empire 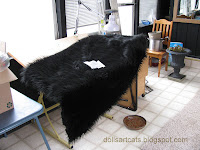 I ordered it something like 3 days ago, hoping I could get maybe 4 doll wigs out of it. I think I can. :D

They have LOTS of faux fur, apparently in industrial widths.

Best Accidental Cat toy ever--I tried to make a metal reinforced "banana" for the new Male Super Gem body because I had hoped to restring Bird so that the leg elastic went through the torso, which would put too much tension on the resin "banana" supporting the head. It turns out you can't run the strings up through the torso, because then he can't sit--he doesn't have the vertical hip cuts to let the string move: 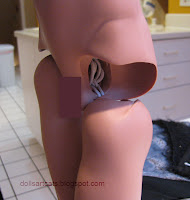 This would be ok if there was a space large enough for a knot in the hip tubes, but even Soom clipped the knot to just a nub, and it got jammed in one of the tubes. I ended up tightening the legs and then sewing the elastic together inside the hip cavity. Anyway, since my restringing was a fail, I still had the wool-covered banana left over: 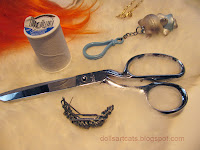 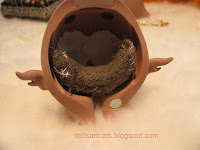 I took it out of Bird's head, put back the resin banana, and left the wool version on the dining room table. This morning both cats have been tossing it around the living room and pouncing on it.