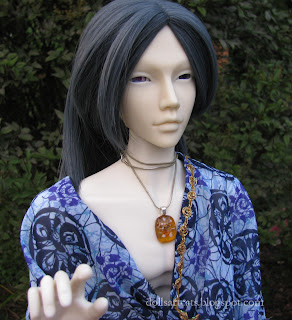 Along with all this other dollie goodness, tygati sent over a Loongsoul Ken head. The mailman, who coincidentally is named Ken, brought the box yesterday and said "I assume a head." And of course he was right, but it's odd that he would remember these things! My hope is to make a budget version of GongGong the Loongsoul merman; but Ken, who has a sly, humorous face that reminds me a little of the Immortality of Soul "M" (who I also like, but have never gotten around to buying) is happy to be a Merman; but for some reason you cannot be a Merman in this house without being Ethel. I blame the "Show Business" song, which K once sang to me in the car, with all the words, at age 10. Also, possibly because he used to live at tygati's house, he wants a purple wig (everyone over there is very colorful) The only purple wig I have here is a ludicrous butterfly samurai one, as seen here: 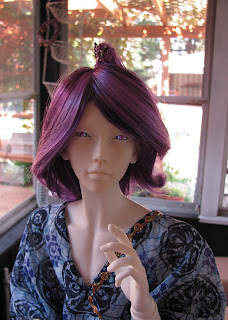 So there is going to be some negotiating here as to the styling of this particular doll. :D 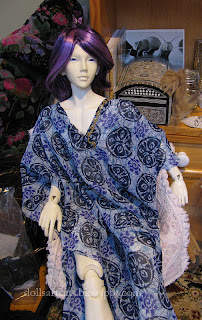 By the way, his head is huge...Minimee sized, or bigger. I have him on a 72 Angelheim body and that is about right. He weighs nearly 3 pounds, I think.