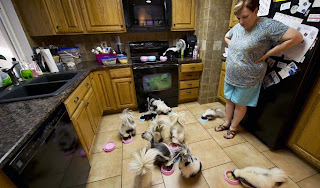 Since we have a cat door, and lots of local skunks, I always have a faint fear that I am going to get up in the morning and go into the kitchen and see this scene. (This was a photo of a UK woman with 14 pet skunks, and the Sun was there, no doubt with a clothespin on it's nose). Some skunk has been wandering around here at night--we can smell it, and the local dogs have been barking, and an almost-entire fig tart was consumed out of our compost pile a few days ago. (After a whole year of stellar desserts, J's fig tart was ok..as an eggplant quiche. For some reason the figs weren't sweet at all and the custard was very eggy. But someone, most likely a skunk, gave it two paws up and ate the whole thing.)

So Tuesday night I was cleaning up the kitchen and I wanted to dump out the used coffee filter and grounds, and the trash was too full to add something so ..grainy and spill-prone, so I picked up the outer filter that holds the inner filter and headed out the back door. (This was my first mistake. I should have dumped the paper filter into a bowl). My second mistake was I turned on only the porch light, forgetting that the compost pile, with it's decorative fencing, is *just* past the reach of the lights. So I feel my way down the hill over rabbit holes, and it smells pretty skunky out there, and I realize the skunk and I have a shared interest in compost. Well, I figure, I'll just be a second, I'll dump the basket and scoot back inside. So I have my hand over the compost pile, and I turn over the outer filter basket, and something furry bumps into my leg, and I drop both the used paper filter and the gold mesh Krups outer filter..on the wrong side of the fence into the compost. The fence isn't hinged, so to retrieve the basket I am going to have to walk past the furry thing, around the edge of the fence, along the compost to the point where I dropped the Krups filter, and then back again. But if I leave it there, it might be stepped on or nibbled or otherwise damaged, and it's my only source of coffee, as I am out of No. 4 filters that fit in the Chemex. (I blame Costco, I bought a Costco-sized box of no4 filters in 2011 and I was sure I would never have to buy them again...until I discovered Sunday that The Box Was Empty). So I step gingerly along the fence, go around behind it, feel for the Krups filter, grab it, and look through the fence to see.. cat ears silhouetted in the porch light. Good grief, it's just the gray cat, come to see what I was doing. So I went inside and washed the filter very, very thoroughly and gave the gray cat a treat.