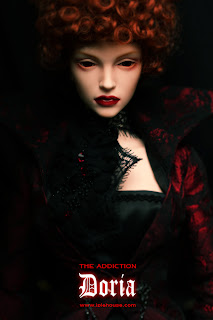 Iplehouse did a redesign of the big EID bodies (new joints) and is now rolling them out along with a new "story"; originally titled "Bloody Tales of Bran", which caused some fits of giggling on Den of Angels as one person said "it sounds like an unpleasant breakfast item", upon which the titling mysteriously shifted to "Bloody Tales of Castle Bran", which I like much more, since it implies that there are a group of people in one place, misbehaving. Doria is fun because she has an extra head, a totally over-the-top, Immortality-of Soul type vampire head including wild horns AND pointy ears. It's like some of Soom leaked over to Iplehouse. I don't need a fab vampirette, though her new cousin Aaliyah is tempting--and now of course I am waiting to see if Aaliyah has a spare head, too. The english-version of Iplehouse is Iplehouse.net, by the way, not .com as the photo shows..and understandably, the servers over there are reeeeeally slow. If I had Aaliyah, I would ignore the whole vampire tale and do her in 15th century Persian clothing, or perhaps 19th century Egyptian or Turkish outfits. Anything with sequins and tassels. :D

Sales link (they say "Sold Out" because they are not "live" yet--or as live as vampires can be, I guess...

Edit--Ooo, there is not only an extra head, there are claw hands too. Aaliyah now looks a bit like Soom's Epidia, without the paws and tail. Hmm, I wonder if people will get both, and sell her human head, like Epidia's head is now floating about the MP.