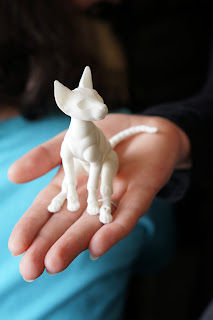 This little cat, "5cm at the withers" to quote Ilsonya, was printed on a 3d printer after being created in Zbrush. He's very light, and fully articulated, light enough that as Ilsonya says, even a Minifee can pick one up without losing a hand. I think the creator's name is Olga Bekreeva , she has a blog that I will toss about for in a while (I have to go to Costco), but I do think she is the first to really take advantage of this new technology to make bjd's. Since it's an additive technology that can do small runs, it's perfect for making resin dolls. Read here through Google translate for a lot more, plus more doll stuff. 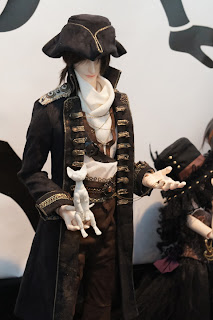 This is one of Ilsonya's photos from the show, and Immortality of Soul 80 centimeter big guy holding one of Olga's cats. (I think his hat was made with one of Ira_Scargeear's patterns.):D See comment below for another, earlier 3d bjd pioneer! Here is Olga's Facebook page:

By the way, you can apparently get your own 3d printer for about 1000.00 USD. I think they get you with the cartridges, though. :D